The typical celebrity spotting for an Angelino is like the prom for an average teenager… hugely anticipated, grossly overrated and usually lacking physical interaction.  That said, every once in a while, you score.
For me, a big night in Hollywood consists of a Melrose Avenue stroll to Pinkberry, stroller and dogs in tow.  But, New England natives don’t do Chihuahuas.  In my house, each of the two dogs weighs more than both of my children, combined.  So we roll Bugaboo, Rhodesian Ridgeback and Rottweiler deep.
Not sure if it was the distraction of the waffle cone or the pomegranate seeds, but on one night I accidentally let go of Emilia’s stroller, and it toppled (ok, flipped) down a few concrete steps outside the shop.  It took only a split-second, but my life flashed before my eyes.  And if she didn’t need an ambulance, I would.
Emilia scraped her face, chipped a tooth and punctured her lip.  I screamed maniacally as she bled profusely, and the dogs stood guard.  Then, miraculously, an angel appeared- disguised as Elizabeth Berkley. 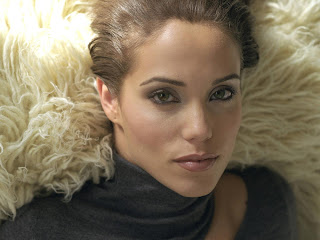 She came out of nowhere (well, actually, she came out of a pimped out BMW) bearing ice and towels.  Don’t let her role in Showgirls confuse you… the girl has maternal instinct.  She was helpful, compassionate and sincere.  And in the end, thankfully, my ego was more damaged than my daughter.
But in Hollywood, no good deed goes unnoticed, especially by your publicist.  And if you were to hear a soundtrack of the moment as it went down, it would be a mix of my screams, Emilia’s cry, and a former “Saved By The Bell” star repeating incessantly “My name is Elizabeth; My name is Elizabeth”.
I have to admit, that for days following, I wondered if a story would surface about Jessie Spano coming to the rescue of an inattentive mother craving fro-yo.  I was thankful she was there, but honestly, I couldn’t have cared less that she had an IMDB web page.  At that moment, all I cared about was my daughter.
Looking back now, I am way more thankful for her.  She didn’t Save the Bell, but she did help save my sanity.
Posted by Karri-Leigh P. Mastrangelo at 5:07 PM

Any fan of The Bachelor or The Bachelorette knows how exciting each season premiere episode can be.  Up to 30 sexy singles gather to vie for the affection of America’s current heartthrob (or sweet heart).  The mansion is filled with glamorous people, shimmering lights, chilled drinks, an infinite amount of hope… and Chris Harrison.  But that's just what you see on camera.
Imagine the addition of a dozen camera crews, teams of producers, lighting designers, stylists, assistants… and one woman going into labor.
My first daughter was due in mid-April 2008, and for medical reasons I was scheduled to have a C-section the week prior.  Technically, I had already begun my maternity leave on the night of March 31, when DeAnna Pappas officially began her ‘journey’ as The Bachelorette.  But, my leave was short lived…
I admit that I am a control freak, and had difficulty walking away from my position on arguably the most exciting and unforgettable shoot of the season.  But on that night, the “most dramatic” rose ceremony would become historic.
I offered to work, with the understanding that I would leave the moment I felt it necessary.  My mother, a former labor and delivery nurse (and avid fan of The Bachelor), joined me.  She said it was in case of an emergency, but I knew it was more about the fun of being on set.
The night was off to an amazing start.  I was in my crew blacks, with my walkie, IFB, and a major bun in the oven.  DeAnna looked amazing, and Blaine Twilley was my favorite guy in the cast.
Throughout my pregnancy, our show creator, Mike Fleiss, had an uncanny ability to guess exactly how far along I was, and how much weight I had gained.  It seemed almost a strange paternal instinct, and it continued that night, as he told my mom repeatedly, “3am… I want her out of here at 3am”.  So just as he predicted the breadth of my belly, he too predicted the time I would go into labor.
Night One shoots until the sun comes up, so at 2:30am, things were just getting good.  But I was starting to feel some lower back pain.  I tried to convince myself this was from being on my feet for too long, but knew my body was trying to tell me something... something big.  I packed up my bags, said my good-byes, and we were on our way back home.
We shoot way out in Ventura County, and I live in Hollywood.  So although I was a little uncomfortable, I wanted to drive because I knew we’d get there sooner.  We cruised the long, dark road back to the 101, and no sooner did I get on the freeway entrance ramp, I felt a contraction.  I kept mum, but looked at the clock.  Five minutes later, another one.  And another.  My mother asked why I kept looking at the clock, but let’s face it… she already knew.
“Once you relax and put your feet up, you’ll be fine”, she said.  She wanted to drive, but I insisted that I do it (control freak).  We arrived home just before 4am, and I woke my husband with the news.  By 4:15am, I was calling my obstetrician and on the way to the hospital.
Of course, I texted from the hospital and let everyone know what had happened.  But keep in mind that DeAnna’s journey began on March 31, so now well after midnight, it was April Fools Day, and no one believed me, until a photo of my hospital bracelet made it’s rounds.
Hours later, Emilia Loren arrived.  And the very next day, I received the most incredible floral arrangement the nursing staff had ever seen… It was from my family at The Bachelor, and it was nothing but roses.