My Sunday with Angelina Jolie

I have a confession.  I recognized her boney ankles and nude ballet flats a mile away.  Granted, if her feet didn’t give it away, the shoulder adorned with latitude and longitude tatts would have.  Either way.  Spotted: Angelina Jolie and kiddos at the Studio City Farmer’s Market.

After ten years in L.A., I have fine-tuned my star spotting skills.  No longer can you catch the car worth more than your home or the purse worth more than your car and guarantee a good sighting.  Like living in a foreign country will sharpen your language skills, living in the City of Angels will improve your eye for an A-lister.  It’s what to do next that is up for debate.
99% of the time, I do nothing.  The other 1%, I can’t contain myself.  And even if I could, sometimes the behavior of the celeb is such that they forfeit their right to privacy- or do they?
My 3.5 year old was waiting somewhat patiently for her turn on the jumper as Angelina and one of the twins approached.  Though they didn’t cut her, they did cut in front of another child.  Not exactly the way to go unnoticed.  In that moment, my weakness took over, and I pulled out my cell to snap a photo.  “Really?” barked her nanny, “That’s so rude.  She is with her family”.  There was truth to her remark, but if I delayed for second thought, I’d miss her.  As Diego would say, “Click”! 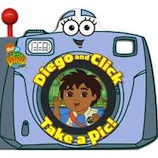 I saw four of her children (three of which were exquisite), at least two nannies, and one (visible) security guard.  Angelina, dressed in a black pencil skirt and silky top, looked better suited for a ladies luncheon than a Sunday market swarming with Starbucks, smudged mascara and sweat suits.  Their footprint was as undeniable as their beauty.
I’ve had one similar experience.  On a park jog, I spotted a swarm of paparazzi shooting Tom Cruise and his mother watching Connor play baseball.  At the time, Katie was pregger with Suri, and their marriage was under major crossfire.  It was Mother’s Day, and a wonderful opportunity for Tom to show his face as a family man.  But, like most of the Cruise happenings, this was staged.  The paparazzi told me that TomKat’s publicist had tipped him off regarding the appearance.  So, he was asking for it.  Aaand, “Click”.

When big stars try to keep a low profile, most (non-tourists) play it cool.  But at times when they are clearly seeking attention, I question if they are forfeiting some of their right to privacy.  The question then becomes where to draw the line.
As I drove home with my organic Persian cucumbers, I realized something.  Angelina Jolie and I live in two totally different worlds, but (I suspect) our fears are the same.  We want to provide for our family and keep our children safe, while maintaining peace and happiness.
All the money in the world aside, I bet it is no simpler for her than it is for me.
Posted by Karri-Leigh P. Mastrangelo at 11:39 AM

I just saw the film “Contraband”.  Mark Wahlberg is “number one” on my list, (yes that list) so he can do no wrong in my eyes (aside, of course, from his recent and ridiculous claim regarding the defense of the 9/11 cockpits).  I thought Giovanni Ribisi was genius, and I left the theatre certainly not enlightened, but thoroughly entertained.  Then I remembered the film’s subplot pertaining to the heist of a Jackson Pollock.
To most, his canvas would resemble a tarp used to protect the floor from a sloppy house painter.  To an art enthusiast, it is sacred, and potentially valued at over a hundred million dollars.  To both, it may still be reminiscent of the rainy day activity completed by a five year old, but who is either to judge?  Certainly not me…
My file cabinets are overflowing with everything from press clippings and headshots to medical records and insurance policies, but the folder expanding at the greatest rate is one containing my children’s artwork.  Do I think either may be the next Jackson Pollock?  Let’s just say I am not expecting a heist anytime soon.  Still, they are invaluable, to me.
My friend hung the most uniquely beautiful canvases in her den.  When I asked what they were, she said each was composed of one of her kid’s stacks of artwork, torn up and decoupaged onto canvas.  Too abundant to hold on to, but to special to discard, she found a way to preserve, appreciate and share their designs.  To her, they were meaningful compilations of love and memories.  To me, they were more exquisite (yet less expensive) than any piece of art I could buy.
My mother, too, came up with an interesting way to preserve our creations.  My brother, sister and I each completed a family portrait while in kindergarten.  To this day, they are framed in her home, beside the photograph from our first day of school.  For anyone who knows my family, you’ll see how telling each piece is of the adult the artist was to become…  To a stranger, you’ll see how even a set of Crayola crayons can create a “masterpiece” worth holding on to.
(Politically minded and literal, Scott's "no frills" attitude was then evident by his representation of me, his baby sister, only as a swaddle.)
(I'll leave this one up to the eye of the beholder, although I will clarify that I have never (knowingly) struggled with Dyslexia.)
(At the time, Jeni's portrayal of a naked family was a tad strange.  When in 7th grade she posted a magazine tear out on the fridge asking, "why can't we all spend more time in the nude?", 'strange' became 'slightly alarming'.  Luckily, she is now a successful celebrity fashion stylist, and, though known to rock the boat, she doesn't leave her clients (fully) naked.
So, are they worth 100 million bucks?  To me, they are priceless.
Posted by Karri-Leigh P. Mastrangelo at 5:38 PM

Liam Neeson (Almost) Scared Me Out Of Motherhood

Not all birth control is created equal.  Whether a pill or a flight with a screaming infant, both options are relatively expensive, and risk dangerous side effects.  Disagree?  Clearly you haven’t flown with my children.

In the film, Neeson, Webster’s top synonym for badass, reluctantly allows his 17 year old daughter to travel with a friend to Paris, where she is kidnapped and intended to be sold into prostitution.  The story hit close to home.  Here’s why.

I spent the summer after my collegiate sophomore year living in London.  I shared a flat with 20 other American students, all there to complete internships in various fields.  I spent four days a week working on a news desk and the remaining 72 hours rushing to obtain photographic proof that I’d visited Europe’s biggest landmarks, all while simultaneously drinking as much as humanly possible.

I remember one Parisian piano bar vividly.  My American friend and I enjoyed a bottle of wine, mapped our tourist plan of attack and could totally tell that the nerds in the nearby booth were checking us out.  When our second bottle arrived as a gift from them, we were hardly surprised.

We thanked them, and intended to move quickly on, until they made the offer only a stupid, drunk, naïve, broke college student would accept.  Tomorrow they’d be heading home to Belgium.  Would we like to take the drive and have a guided tour of Brussels?

Fast forward several hours of fear, regret and prayer later, we were in the back seat of their car, wishing we could decipher their French and foil their plan to (insert gruesome murder plot here).  Creepy details aside, once in Brussels, we successfully bailed on our “tour guides”, and grabbed the first train back to Paris.  The ride home was silent.  A week later, we laughed about it.  A decade later, I am lucky to have survived it.

In my 20’s, I looked at that European summer as a life-altering rite of passage.  Now in my (gulp) mid-30’s, I’ve learned that it is our reflection back upon these moments that are even more life changing than the experiences themselves.  Still, so many questions remain.

Would my parents have let me leave for Europe if they had seen this film?  Will I offer my children the same freedoms given to me, and how they will behave if I do- or don’t?  I wonder how often people decide not to become parents out of fear for what could go wrong.  When does risk outweigh reward?

I am lucky to have had two daughters prior to seeing Taken.  So far, the reward outweighs the risk.  But plan ahead.  Taken 2 hits theatres in 2012.

How One Casting Session Changed Me... But Not My Boobs

As the casting interview ended, those watching the applicant from behind closed doors chatted about her beauty and sweet nature.  I interrupted with the obvious question.  “Was anyone else completely distracted by her freakishly long fingers?”

Though a chuckle filled the room, even I was taken aback by my brash criticism of a woman I barely knew.  This was the moment I knew that reality television had changed me.  But for better or worse?  That was the question.
Thankfully, the game wasn’t over for the stunner blonde, who went on to be one of the final four contestants remaining on the show she was vying for.  But in some ways, it was over for me.
I have never forgotten those freakishly long fingers, or my criticism of them.  In fact, I was reminded of them again just yesterday as I read my friend Trista Sutter’s reaction to the InTouch magazine cover suggesting she has “plans” to have a boob job and botox.

Has she thought about it?  I’m sure.  Either of us would be hard pressed to find a woman- let alone a mother- who hasn’t.  But don’t throw your scrubs on just yet.
If a plastic surgeon got his wings every time a woman considered a procedure, they’d all be angels instead.  There would be no fake boobs, and let’s face it- reality television would have a lot less sex appeal.
To have insecurities is human.  To then have them dissected and critiqued by the masses, justified or not, can amplify those issues to an entirely different level.  Unlike the person on your television screen, it isn’t pretty.
I have seen numerous people suffer the consequences of an unsavory portrayal in the media- be it a broken heart, bruised ego, or something way more significant.  Sometimes, there is gross misrepresentation.  (I have experienced this first hand.)  Others, the hurt comes more from realization of the truth than the fabrication of lies.  Either way, to endure and overcome the experience can be rewarding.  Yes, rewarding.
My career has given me many gifts… incredible adventure, good friends and cool stamps in my passport.  But one of the greatest of these gifts is the ability to see everyday people be challenged physically and emotionally in ways they never thought imaginable- and conquer… quite beautifully.
So, for better or worse?  For better, for sure.
Posted by Karri-Leigh P. Mastrangelo at 9:31 AM