I am incredibly saddened by the fact that the older our children become, the harder it will be for them to play The Six Degrees of Kevin Bacon.

Honestly, I have never struggled with Kevin Bacon-ing myself.  I even have options.

Option 2:
While living in LA, I lived right next door to Anthony Denison, who starred in The Closer with Kyra Sedgwick, who is married to Kevin Bacon.

Option 3:
Lastly, I share a shoe closet with Sarah Jessica Parker, who starred in Footloose with the Baconator.  (Ok… that is a blatant lie, but the connection I most wish was legit.)

In keeping with the true nature of the game, the idea is to connect people in the entertainment industry to Kevin Bacon via their film roles.  Seeing as I have had a limited number of appearances on camera, this becomes a bit more difficult.  But I can do it.

One of my first jobs in Los Angeles was on a talk show called The Other Half, and I was often used as the guinea big during a makeover or fashion show.  At the height of my on-camera career, I did a fabulous bit with Carrot Top.  No joke.

Dick Clark was a co-host on that show, and I was honored to share a stage with him.  Interestingly, he is also the key to my Six Degrees of Kevin Bacon.  Here’s how.

Option 4:
I was on The Other Half with Dick Clark. 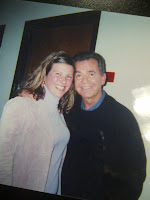 Dick Clark was in Confessions of a Dangerous Mind with George Clooney.

George Clooney was in The Thin Red Line with Sean Penn…

... and Sean Penn was in Mystic River with Kevin Bacon.

Thanks for the memories, Mr. Clark.  And, thanks for giving me one of Hollywood’s Sexiest Six Degrees of Kevin Bacon!

Mindy Kaling Made Me Do This

I loved Mindy Kaling's book, "Is Everyone Hanging Out Without Me? (And Other Concerns)".  She dedicates a chapter to the (self-proclaimed) narcissistic photos on her BlackBerry, which I loved.  As a token of my appreciation for her, and for you, I am totally copying her fab idea.

Welcome to the first installment of "My Life: According To My Media Card":

It’s true what they say.  Opinions are like assholes.  Everyone has one.   I’ve got no problem with that.  My complaint is that though everyone has an asshole, I don’t want to hear about it, and certainly don’t want to be reminded of it over and over again.  Often times, I feel the same way about opinions.

I recently chatted with a co-worker who said her four year old received this in a birthday party goodie bag. 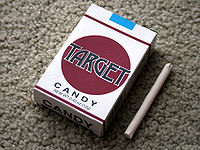 After confirming that the goodies were not from Amanda Bynes, I quickly launched into a tirade about how I would freak the f-out if my daughter ever received the same.  I would have called the parents, the pre-school teacher and the pediatrician.  Hell, I would have called Dr. Drew.

Come to find out, my co-worker did nothing but throw them away before her child had a chance to see them.  In that moment, I learned she and I were as different as Sandra Dee in the beginning and end of Grease.  I shut my mouth and went back to my office, craving a candy cig and wishing I had shiny pleather spandex. 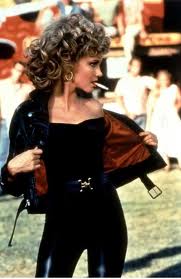 The next day, my eight year old Rhodesian Ridgeback was diagnosed with cancer.  Having lost our young Rottweiler to cancer just a few months ago, this was another devastating blow.  Heartfelt talk of treatment options became heated debates with tears.  Hours later, I was no more sure if I had made the right decision than Kim Kardashian was when she walked down the aisle.

Then, just as I had voiced my rage over the poor choice in goodie bag treat, someone voiced rage with regard to my choice of treatment.  And, it wasn’t the wholesome version of Sandra Dee.  Even worse.  It was my sister.

I’ve thought a lot about her opinion since, and why it infuriated me as it did.  Though part of my anger was in her choice of words, part was in hearing someone’s opinion in stark contrast to my own, with regard to something I took so personally.

I have learned a valuable lesson since.  I like to think that I welcome the opinions of others, but have come to learn that I welcome them more when they are somewhat similar to my own.  So yes, opinions are like assholes, and everyone has one.  But there are times that you shouldn’t talk about yours until you are asked to.
Posted by Karri-Leigh P. Mastrangelo at 10:55 AM

My New Office Has A Secret Stash of Holy Water

I am usually a good judge of character, but when I started this new gig* a few weeks ago, my initial assessment of the office environment left me running for the unemployment office.

* (a gig is a job in the entertainment industry, but also an acronym for the Gluten Intolerance Group)

First, there was this. 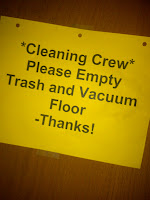 I started to question-- you kiss your mother, life partner, boyfriend, girlfriend, boss & sugar momma all with that mouth?

Then finally, something positive.

Thank God.  They have bagels.

But, the best was yet to come.  As a producer excused herself from my office to run and grab a Holy Water, I watched her step over into a supply closet, and exit with the aforementioned Diet Coke.  As it turns out, thankfully, the kitchen wallpapered with passive aggression was for a different show.

I am excited about my new project, it's staff, and it's makeshift kitchen.  Can't wait to share more of it with all of you.
Posted by Karri-Leigh P. Mastrangelo at 12:04 PM