I am biting my tongue, and it's not because I used the word cl*t in a recent post.

A few weeks ago, I admitted here that "I prefer several E! News correspondents over Giuliana Rancic.  In fact, I’d rather listen to the stage security guard on the mouse that ran under the catering table than Giuliana on just about anything… other than her recent baby news".  Shortly after, I was offered (and jumped at) the opportunity to work with Giuliana & Bill on their upcoming NBC reality show, "Ready For Love".

Since shooting began, I have been nothing but impressed with them. They are talented, dedicated and hard-working professionals, sincere with and compassionate toward both talent and crew.

With cast, Bill shares anecdotes from his time on the first season of The Apprentice, while Giuliana compliments their beauty and their shoes (like these incredible Alejandra G's): 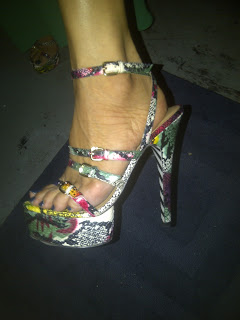 Most importantly, they both radiate when celebrating the anticipation of their baby boy.

In my career, as in my personal life, I continue to learn many valuable lessons.  Still, whether right or wrong, I will fight 'till the death for what I believe.  Sometimes it backfires, and I am left wishing I had conceded sooner.


I am learning that the two worlds often go hand-in-hand.  For more on how, please read this interview with Candace Anderson (@CandaceRose).


P.S. It's the very first time I let someone put me in the hot seat!

Thank You HelloGiggles.com for Sharing My Words with the World!

I've always loved to write.  My mother says that when changing my childhood bedsheets, she'd find scraps of paper scribbled with poems and stories crumbled at my feet.  From those experiences, in the 3rd grade came a "book" that I wrote and illustrated.  Page turner that it was, "Floating Hearts & Stars" won a statewide contest for young writers.  At 18, the book was a cherished treasure that I sent with my Dad when we buried him.  Years later, I still make notes at my bedside, although I now text them to myself.  "Dirty Laundry & Dirty Diapers" is a continuation of that story.

My life is a busy one.  Between my family, my career and the hobbies that I'm passionate about, there's little time left to reflect upon all I have become, and all that has been given to me.  Writing helps me to put this all in perspective, and it is an honor to share it with you.

With such diversity in the world, there is one relationship we all share: that of a Father and Child.  For my thoughts on this topic that I hold closest to my heart, please enjoy "A Father By Any Other Name: Is It Really The Same?".  I am so thankful to HelloGiggles.com for sharing my words with the world.

In Support of Free Miley: My Most Embarrassing Moment

Poke fun at Miley Cyrus all you’d like, but each of us has had an incredibly embarrassing moment (or nine).  So in support of my Free Miley movement, as I'm pretty sure I am the only one participating, I have chosen to over share.

In college, I was your typical blast in a glass… or make that keg.  As a proud Boston College Eagle, my friends and I were die-heard supporters of the blood, sweat and tears our athletes lost for our Alma Mater.  It is for that and that reason only that we got very, very drunk at Dick’s Last Resort the night before a big football game.

For those of you that aren’t familiar with Dick’s, it’s known for fine cuisine like Hooters is famous for wings. 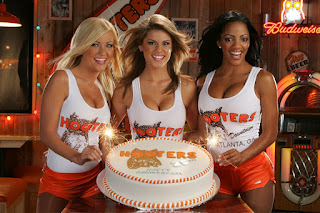 The plates are paper, the wait staff is rude, and the most you can look forward to is an enormous paper hat folded into the shape of a penis.  The only problem is, you aren’t supposed to ask for one.  I learned that the hard way.
After requesting the party favor, a waitress told me I was going to have to “work for it” (never a good sign).  Then, “have you ever heard of a muff dive?” (also, never a good sign, btw).

She brought me (and a crowd of supporters with cameras) over to a big group of guys.  Long story short, she seated one of the guys down, placed a mug of whipped cream between his legs, dropped a shot glass into it, and I took it down.

Yes, I took a muff dive.  And in return, I got the coveted paper penis hat.  “But,” the waitress added, “I don’t want you to look at the hat”.  Distracted as I was by the hoards of people anxious to take photos with me, I obliged.

Several hours and conga lines later, it was time to go.  On the way out the door, I noticed a table of suits, one of whom looked very familiar.  And I never forget a face.

I removed my hat, tried to straighten my hair, and compose my self enough to say hello.  As it turns out, he was an old family friend and respected businessman, who just happened to coordinate a memorial golf tournament-- in my father’s name.

“I thought I recognized you, Karri-Leigh”, he said.  “But I wasn’t sure if I was staring because I knew you, or because of that hat you’ve been wearing all night”.

As I walked out of the bar, I read the hat.

So, because we’ve all made mistakes, be sure you do something special for your Dad this weekend.
Posted by Karri-Leigh P. Mastrangelo at 1:23 PM

I've got more bizarre photos on my cell phone than Lindsay Lohan.  During a recent slideshow I learned (ok, confirmed) that LA does at least three things better than any other city: tits, ass and advertising.


And just in case you are the type of person that really believes in signs: 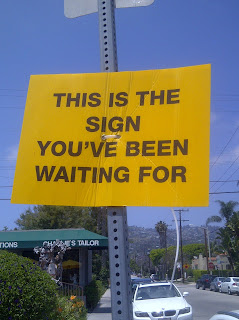 "My Life: According to My Media Card" is inspired by Mindy Kaling's fabulous book "Is Everyone Hanging Out Without Me?" and the first installment can be seen here:

(Enjoy this post? Prove it by clicking on the cute icon in the upper right.)

Move Over, Barack Obama! Make Room for Gadget the Beagle

I’ve been up and over Laurel Canyon so many times that I can tell when the Goldbergs (Bermans, Liebermans or Kleins) finally update their groovy 1970’s wood paneling.  Unfortunately, I don’t have the same skill set for George Clooney’s home, but I do know he lives in the ‘hood.

A few weeks ago, Clooney hosted a fundraiser at his home to support Obama 2012.  I know this not only because it was all over the news, but also because Laurel Canyon was covered with banners addressed to the Prez, and traffic was even more of a bitch than usual.

But move over, Barack Obama, because Gadget the Beagle is in town.  Here’s how I know.

Over the weekend a neighbor came by to inquire about a loose Beagle.  I hadn’t seen the pup, but promised sincerely to keep an eye out.  The next day there was a visit from someone new, looking for the same dog.  When asked if he was the owner, the man replied “I’m just a volunteer”.  (I repeat: a volunteer)

As it turns out, Gadget the Beagle was recently rescued from a medical testing laboratory.  Still timid and adjusting to life outside the lab, the anxious pooch was able to escape the (hopefully) watchful eye of his dog sitter, and hasn’t been seen since.

Late last night, I saw a Prius cruising the neighborhood (albeit in an environmentally friendly way) decorated with info about poor missing Gadget.  Thankfully, word has really gotten out.  For each sign previously mentioning Obama 2012, there are 10 new ones featuring Gadget.  A large reward was been put up for his safe return.

Still, I can’t help but wonder how much more closely people have read notifications regarding Gadget’s disappearance than that of the latest Amber Alert.  Honestly, really think about that for a second...  (I’ll wait for you.)

Whether it’s his smile, his story of survival or the sweet ransom paid for his safe return, this Beagle has become the hottest thing (near) Hollywood.

I certainly hope that he and all those who have lost their way find a way back home.
Posted by Karri-Leigh P. Mastrangelo at 2:34 PM

What Me, You, Justin Bieber & Kate Upton Have In Common

I hate to break it to you, but Justin Bieber poops.  Hell, so does Kate Upton. 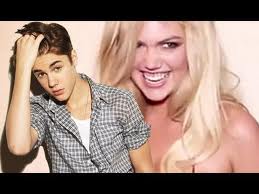 In fact, everyone poops- and I’ve done the research to prove it. 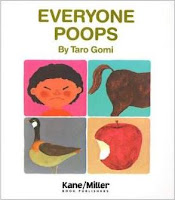 Still, it’s a tough pill for some people to swallow.  Why is it that celebrities doing everyday things will never cease to amaze us?  Let’s face it.  A snapshot of Ashton Kutcher picking up a box of magnum condoms will sell more magazine covers than everything with the word politics, combined.

Unfortunately, I am part of the problem. 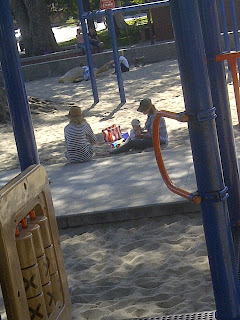 I snapped this slightly disrespectful and definitely somewhat stalker-ish photo at the playground this weekend.  Seated in the sand are Elizabeth Banks and Jenna Fischer, each with their babes.

Honestly, they’d have gone completely unnoticed if not for my uncanny/creepy ability to recognize a familiar voice.  My first reaction (obviously, “oh shit, Pam is cheating on Jim!”) was quickly replaced with a survey of their baby products and some hardcore eavesdropping. 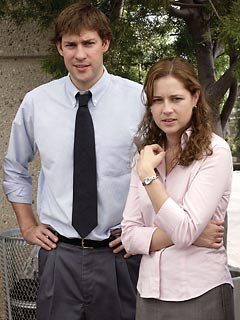 Here is the exclusive groundbreaking news I uncovered:  They are just Moms.

Most of the chatter I heard was over fear of flying not with a terrorist, but with an infant.  This is totally understandable, seeing as it’s questionable to me who would be discriminated against more at LAX.

Bottom line: they were normal, simple, regular moms.  Ones that, I certainly hope, would join in my efforts to stop all other mothers from creating something like this (which I discovered in a doctor’s office) ever, ever again: 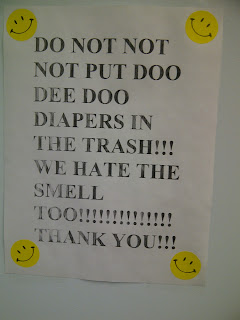