Here's What Your Kids SHOULD Be Doing This Summer

Once the temperature heats up, social media becomes a hot spot for summer reading lists.  I've seen everything from collections of simple beach reads to heavy page-turners that you won't be able to put down for 96 hours straight.

What I have yet to see, unfortunately, is a list of fresh and interesting picture books for young children.  Whether to educate, inspire or just bring about a good giggle, here are some books I highly recommend you try out with your children this summer.


Posted by Karri-Leigh P. Mastrangelo at 9:03 AM

“How can a God exist when there is so much famine in the world?”

A Pastor once told me that for those questioning their faith, this is a concern most commonly voiced.  His response was quite simple.

The earth is filled with abundance.  There is more than enough to go around.  God did his job.  Now it is the responsibility of the people to share those gifts appropriately.

This post has been a long time coming, ever since I started collecting donations for my most recent Operation Christmas Child Project in the summer of 2014.  I knew that August, nearly one year ago, that our work would leave a much larger footprint than ever before.  How did I know?  One word.

I began contributing to Operation Christmas Child as an individual after my daughters were born.  Then in 2012 I decided to use this blog as a platform to collect donations from families and friends.  The response was overwhelming, not in size per say, but in the relationships I had with those that contributed.  I heard from people that had been out of touch for over a decade, sometimes two.  But there was always a direct personal connection.  If we were playing Six Degrees of Kevin Bacon, but with me as Kevin Bacon, everyone would have connected within one degree.  So boring.

So last year, that all changed. 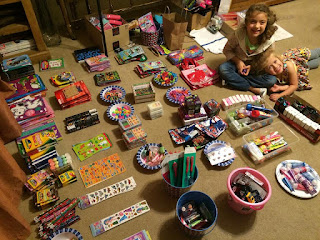 First I heard from Melanie Mascari, a woman from my hometown area who’s employer, SARAH Tuxis (a non-profit agency that provides creative supports for individuals with Intellectual and Developmental Disabilities and their families), educates their staff about one charitable project each month.  It is completely up to the employee whether or not they choose to contribute, but the opportunity is there.  When Melissa asked me if she could share my blog post with her co-workers as part of their monthly iniative, I almost fell off my feet.  When I large box then arrived at my doorstep with donations from SARAH Tuxis, I peed my pants.  A little.

Next I heard from a former cast member (and friend) who had shared the project with some of her co-workers who wanted to contribute.  Then another woman who was dating a guy she wasn’t too sure about, but was happy to hear he wanted to send the biggest monetary donation I’d ever received.  She and I went shopping together (on his dime) and took photos of all we were able to purchase with his help.  Their relationship may not have lasted, but the impact of his gifts certainly did.

Come November, as with every year, our spare bedroom turned into Santa’s Workshop.  My daughters helped me sort through all of the products we had received, and spend the monetary donations to fill in the holes of what we lacked.  That work, while exhausting, has proven more and more meaningful (and emotional) each year.  In the end, we donated nearly 100 shoeboxes PACKED with goodies for children who would receive nothing else on Christmas morning. 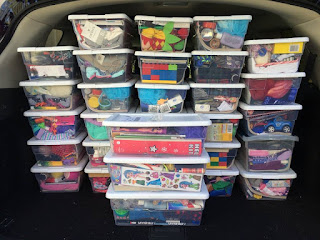 When completing the paperwork for each box and paying it’s shipping cost (which I incur personally), I am able to track the packages.  In 2012, our boxes went to Panama.  In 2013, they went to Madagascar.  In 2014, they went to the Philippines.  (My 7yo is a huge Manny Pacquaio fan, so this news was a big hit.)

Next month, I will begin taking contributions for the 2015 collection.

Got a drawer full of (unopened) soaps and shampoos from hotels?  I’ll take ‘em.

Tired of the unnecessary crap kids receive in goodie bags these days?  Send it my way.

Whether you want to shop alone for a moment of peace and quiet or with your kids to teach a lesson about social responsibility, go for it.  Whether you want to write a check or save a tree by clicking on PayPal instead, that works too.  Or, if times are tight and you want simply to make a handmade holiday card, that is the very best gift of all.

There is something for everyone.

(Isn’t that what abundance is all about anyway?)

Thank you to everyone who helped make this year’s project so memorable that it took me months to collect my thoughts on it well enough to share.

And, to you, thank you for reading.