I thought renting a classic car was the perfect birthday gift for my husband.  We were headed down to Orange County to spend the day celebrating my niece’s birthday.  We could drive down there with the top down, maybe cruise the beach, and return both refreshed and sun-kissed.  Or, at least I thought that was the way things would turn out. 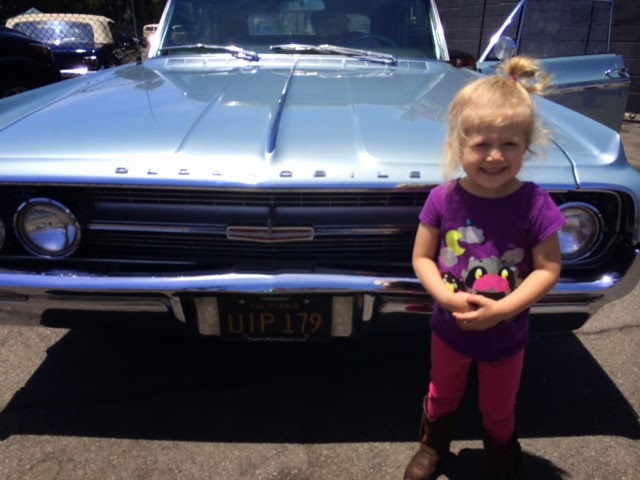 Granted we got on the road to pickup the 1964 Oldsmobile Dynamic a bit later than I’d hoped, but it’d be a quick transition from the safe seatbelts of our own car to those of the rental.  In fact, I’d passed on the 1965 Mustang in exchange for this beauty only because of the owner's promise that it had functioning seatbelts.

Let’s face it.  Any self-respecting, minivan-driving mama knows where this is headed (even though I will never drive one of those God forsaken things).

The car didn’t have working seatbelts.  And my daughters, who are 4 and 6, have been conditioned to NEVER ride in a car without being buckled in.  In fact, for years my eldest would say “buckle me” when she wanted to cuddle snuggly.  They are hardwired.  So when my youngest saw us trying to safely rig a broken waist belt into something the CHIPs wouldn’t lock us up for, she melted down like Erik Estrada in a nightmare over losing his hair.

The renting agent reassured us that because seatbelts were not required by law when the car was designed, it was legal to drive without them.  But regardless of whether or not I was okay with that excuse, my 4 year old wasn’t.

Fifteen minutes later, I found myself urgently releasing her from a makeshift seatbelt even MacGyver would love in order to get her out of the car before vomiting on it’s 50 year old interior.  She had worked herself up so such and extent that singing no amount of Disney songs was going to calm her.  Off to Plan B.

We returned the Dynamic, hopped back into our own car, and drove down to Orange County not in the silence of frustration or huffs of anger, but to the continued meltdown of a still unsettled toddler.  Her lengthy reaction was unlike anything I’d see her experience before, heartbreaking and infuriating at the same time.

Ultimately, she fell asleep moments before arriving at the party.  My eldest and I, more than fashionably late, rushed in to celebrate.  Twenty minutes later, my husband carried our youngest into the party, looking refreshed and like nothing had ever happened.  In fact, she’d had the best disco nap of anyone.

The rest of the day was sweet and uneventful, especially compared to our morning.  Clearly we hadn’t ended up with the beautiful day I’d dreamed up, but it was beautiful in another kind of way.

I was reminded that everyone has good days, and bad.  The key is to keep on driving forward.