I’d be hard pressed to find a post-pubescent American without some memory of Dick Clark.  Luckily mine isn’t merely of seeing him on television, but of helping him make it.  I’ve written of him here before, as the mention made Six Degrees of Kevin Bacon-ing myself a sweet and simple task, but there is way more to my memory of him than that.  My connection to Mr. Clark plays a large part in my take on life. 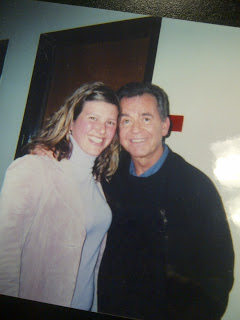 I can’t remember a childhood New Years Eve that didn’t include watching the ball drop with my family.  The daughter of a former emergency room nurse and paramedic, holidays that involved lots of drunk driving like NYE, Halloween and the 4th of July were usually spent out of harm’s way (unless you are one to consider the television dangerous).

Many years later, my first job in Los Angeles was working alongside Dick Clark on the set of his talk show, “The Other Half”.  In the decade since, I have been lucky enough to work with everyone from Justin Bieber: 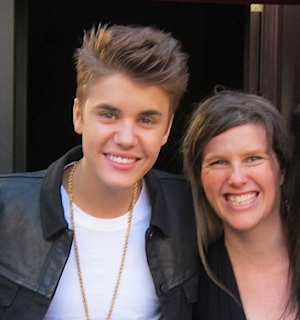 to Kermit the Frog (and maybe a few Bachelors): 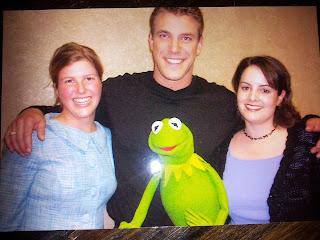 but no experience has been as powerful as standing beside Mr. Clark (although putting my aging on blast like this is playing a close second).  Here’s why.

I really wish a stranger had walked into our den on an early 1980’s NYE and said “someday, you will work with that man” as the ball dropped, just to see my reaction...  Or do I?

I grew up in Connecticut.  I wanted to be a child psychologist.  I barely knew how to operate a Polaroid.  But things change.  Had someone told me then what I know now, what (if anything) would I have done differently?  Should we be as adults what we are as children?  If so, how completely?  And, for the love of God, why?!

I could never have imagined where my life would take me.  It is nothing like I ever pictured, yet still I cannot picture it any differently.

As we head into the New Year, remember that life happens for no reason other than to be lived, and hopefully, loved.  Be open to whatever it brings you, as you never know when you may end up finding “The Other Half” of what you expected- or didn’t even know you were looking for.

Wishing you 2013 blessings this year.

Here Is Light For Newtown... And For You 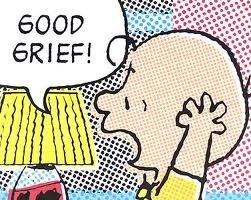 Charlie Brown’s reference to grief should be the only one we hear repeatedly this time of year.  Unfortunately, that's hardly the case this season, as we've all spent the last several days in mourning.

The good news is, there is light.  Granted it may be difficult to find, but with the proper tools, Newtown can find light. 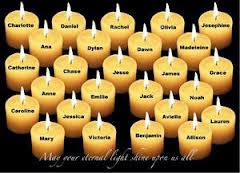 It's no secret that I lost my father to cancer when I was 18.  I was 14 when he was diagnosed with a brain tumor larger than a grapefruit.  My sister was 10.

So began a lifetime of changes...  everything from regular sessions with Agnes, the elderly social worker as relatable as a duck, to my mother’s new “don’t sweat the small stuff” mentality.

But one thing never changed.  I still miss my dad everyday.  I hate that he never met my husband and cry because my kids will never experience the love of a living grandfather.  That said, I consider myself to be a (relatively) well-adjusted adult.  So I lucked out.

Indeed we lost 20 children in Newtown, but we also lost 7 adults, many of whom had children of their own.  I want those kids to know they are not alone in their darkness.  There is light.  And here is a wonderful place to find it.

My beautiful friend Julie, a 9-year volunteer at Circle of Tapawingo and creator of this video, shared the following:

“One of camp’s hardest hours is Circle Time. We come together, in a circle, to give each girl the chance to share her story -- as much or as little as she wants -- of how her parent died. For some, there is manageable sadness. For others, only sobbing and muffled words. Each time what I am struck by most is how girls so young know how and when to console so well... when to reach for the tissues, when to embrace, when to show just the right amount of comfort to say "I'm here".  Often we don't know what to do in these scenarios as adults, yet these inspiring kids know exactly what to do, with strength and wisdom beyond their years. I am there to help, teach and support them. Ironically, they have done just that for me in return.”

The Newtown victims had their voices taken away, but those they left behind still have theirs, and deserve to be heard around the world.  Places like Circle of Tapawingo can help.

You can learn more about the camp to help and support their important mission here.

Posted by Karri-Leigh P. Mastrangelo at 9:15 AM

John Walsh Saved My Holiday, And He's About To Save Yours Too

As I waited, furiously checking my phone for responses to an article on the Today Show website in which I am quoted alongside Brad Pitt (for reals), a non-Christian, middle-aged mom stormed toward the end of the line screaming, “Are you kidding me?  A line at the post office?  What could be happening in the world that there is a line at the post office?”

In all honesty, I expected the peeps from SNL (or at least Funny Or Die) to pop out with cameras, casting directors, or Andy Samburg at best.  But nothing.  Her actions were truer than anything on Storage Wars.  Bah Humbug.

While the holidays bring out the best in many of us, they can also bring out the worst.  You likely need proof of this like you need to see more Elf on The Shelf photos, but bear with me.  I am pushing an important end message here.

On two separate occasions this weekend I heard crying children head to the front of a store to ask for help after losing track of their parent or guardian.  I am still torn as to whether my reaction was more of anger or sadness.  Either way, there was empathy for both mother and child, and an appreciation for John Walsh.

Yes, John Walsh.  Everyone has seen an episode or 600 of America’s Most Wanted, created and hosted by Walsh, who became an advocate for victims' rights after the murder of his son in 1981.

I still have memory of that summer, when 6 year old Adam was abducted from the toy section of a Sears department store.  My mother used news of the then only missing boy to teach me a lesson about wandering off.  Then, when the 1983 made for TV movie “Adam” aired, she had me watch it.  Unfortunately, the ending of the film was as tragic as reality.  16 days after his disappearance, Adam’s head was discovered 120 miles from his home.  Nothing else was ever found.  (His murderer was convicted and later died in prison.)

I was 7 years old when “Adam” aired, but remember it to this day.  I am thankful to my mother, as unconventional as her ways may have seemed, for providing the reason why my girls doing this still scares the crap out of me. 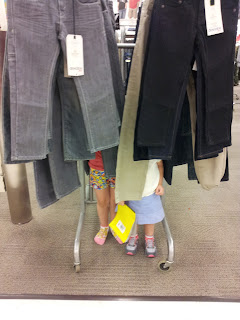 There is so much to think about as the holidays approach… travel, shopping, expenses, stressful family visits, and coming up with innovative ideas for your Elf on the Shelf.

But more importantly, the holidays are about giving- giving joy, giving hope, giving thanks, and giving love.

Don’t lose sight of your love, literally or figuratively.

Posted by Karri-Leigh P. Mastrangelo at 11:50 AM

Last night after I put the kids to sleep I caught Kiddo, our Elf on the Shelf, chilling on the couch watching the Victoria's Secret Fashion Show.  Not that I can blame him...  I mean, reporting back to Santa on all the naughty and nice that happens in my house is no easy task.  But then, he just disappeared.

This is where I found him. 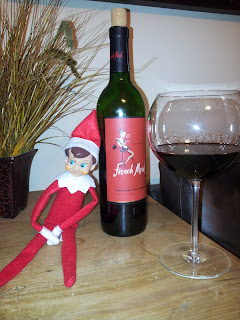 Then he ducked out for a smoke. 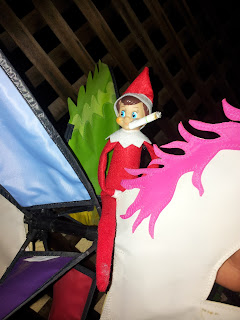 I figured he didn't want the girls to smell it on him because I saw him here next: 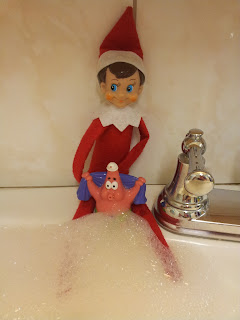 But then I realized the Victoria's Secret stuff had really taken things in a different direction than I had first suspected... 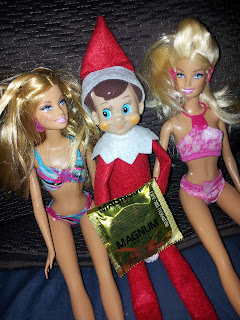 Unfortunately for Kiddo, that didn't work out.  This is where I found him last. 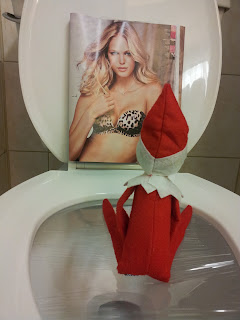 I just thank God that I saw him before my daughters did, as this would be a really tough one to explain.


Posted by Karri-Leigh P. Mastrangelo at 8:22 AM