I Can't Tell You What This Is Really About Because It Will Ruin The Ending, But I Guarantee It's Worth The Quick Read

Yesterday I took my first grader to get her hair cut.  While I sat in the spinning chair beside her, with my youngest in my lap, we were treated to way more than the look on my daughter Emilia's face as her long locks fell to the floor.

An elderly woman entered the salon, supported by her granddaughter, who appeared to be in her mid-thirties.  "We are going to a wedding tomorrow", she said, "and my grandmother wants to look beautiful". 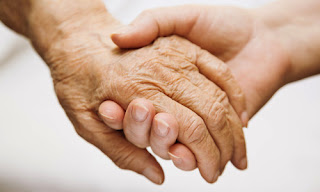 The elderly woman said very little, but smiled consistently as the stylist trimmed her snow white hair.  Having supported her physically through the door, the granddaughter now helped her loved one emotionally.  As she spoke tenderly about the nuptials they were about to celebrate, I could not help but be filled with joy for the bride, groom and their families.  At the same time (somewhat selfishly) I was also reminded of my own wedding, which neither of my grandmothers lived to attend.

I was very close with both of my grandmothers.  My maternal grandmother lived across the street from me for most of my childhood and I saw her on a near daily basis.  In fact, my daughter Emilia is named after her.  (For those of you who remember my grandmother as Jeannette, you are correct.  But, that was her middle name.  She went by Jeannette only to differentiate herself because Emilia was a popular name in her German family.)  My paternal grandmother, Angelina, lived in the next town over.  The Italian (read: big) side of my family gathered there every Sunday for pasta, the pool and more pasta.

Unfortunately, I lost both of my grandmothers before our wedding day, although my husband and I were gifted the time to celebrate our engagement with my mother's mom.

Still, as I stared longing at the lovely grandma in the salon, my heart filled with joy for her and those who would be with her this coming weekend.

Once her trim was completed, she smiled gratefully and took those ironic "baby steps" toward the door.  I wished her a wonderful time at the wedding.  She, her granddaughter and the stylist simply smiled back.

Once her client had left, the stylist came to me.

"She isn't going to a wedding", she said.  "She has advanced Alzheimer's and the only way she will allow her hair to be cut is if she believes she is headed to a big event.  Every time it is something new... a wedding, a holiday party, a graduation."

In that moment, I was overcome with so much emotion.  But mostly I was happy for that little old woman, who gets to celebrate momentous occasions over and over again in her mind- even if only for a moment.  While I cannot begin to comprehend how difficult it is to care for someone struggling with this terrible disease, I hope her loved ones can appreciate the beauty of that moment as much as I did.

Posted by Karri-Leigh P. Mastrangelo at 9:19 AM

Today's social media and networking websites challenge us to describe ourselves in a very brief bio, offering a mere couple hundred characters in which to sum up decades of life.  Though nearly an impossible feat, I finally settled upon a few key phrases, choosing to focus on my career as a reality television producer, passion for writing and lifeblood as a mother.  Then, I ran out of characters.  Let's face it.  The rush of today's society can be very limiting in that way.

Still, it was those three descriptions that came to a head yesterday in a way I never expected.

My sister, Jeni Elizabeth, is a very well established personal and network wardrobe stylist in Los Angeles.  She has a nearly impeccable reputation both in her career and her life as a mother and step-mother.  Her ability to balance a strenuous work schedule with a loving home and two very young children is admirable, to say the least.

That's why when Joel McHale and his team at The Soup took a major stab at her parenting skills, it was impossible for me to stay tight-lipped.  Here's how it all went down.

Yesterday morning, the Facebook page for E's television show The Soup teased a clip from the daytime talk show The Real, for which my sister is the Lead Stylist.  In a brief segment featuring fun products, Jeni walked my 8 month old nephew, Tyler, out onto the stage wearing a soft onesie with a mop on the front of it.  When placing him down to crawl, he cried.  Not a shocker.

Within moments, the clip had been viewed thousands of times and hundreds of faceless strangers began lashing out against her.  Later last night when The Soup aired on national television, host Joel McHale's guest, actor Will Arnett, introduced a revolutionary product inspired by my nephew, called "Baby Attached to the End of a Weed Whacker".  At that point she made the decision to temporarily shut down her personal website, which was inundated with terrible insults. 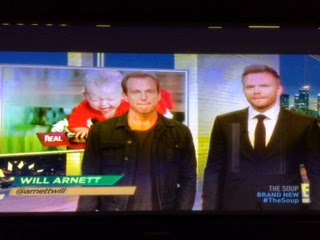 My issue isn't with The Real, The Soup or even Will Arnett.  My greatest concern is that had The Soup let that clip air just two seconds longer, they would have seen this: 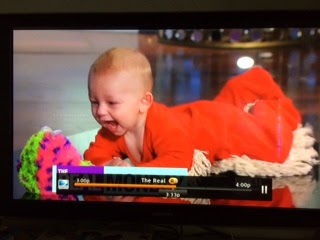 As a television producer myself, I could not be more well-versed in the art of editing.  I spent nearly 5 years with The Bachelor, a franchise best known for making people look crazier than they claim to be.  Still for me, this crossed a line.

Though I never met previous Bachelor Juan Pablo Galavis, I was outraged by the remarks he made when asked by a member of the press if a gay man should be The Bachelor.  I immediately found and listened to the raw audio of the interview before jumping to conclusions.  Maybe, just maybe, had the news clip aired a moment longer, the result would have been way different.  (Let's just say in that situation, the media got it right.)

I know better than to believe all that I see on television, see in tabloids or read online.  In fact, I take so much with a grain of salt that I should be concerned about my health.

My only hope, for the next victim's sake, is that everyone else does the same.

Posted by Karri-Leigh P. Mastrangelo at 11:25 AM

I Want To Pass Recipes, Not Anxiety, On To My Daughters 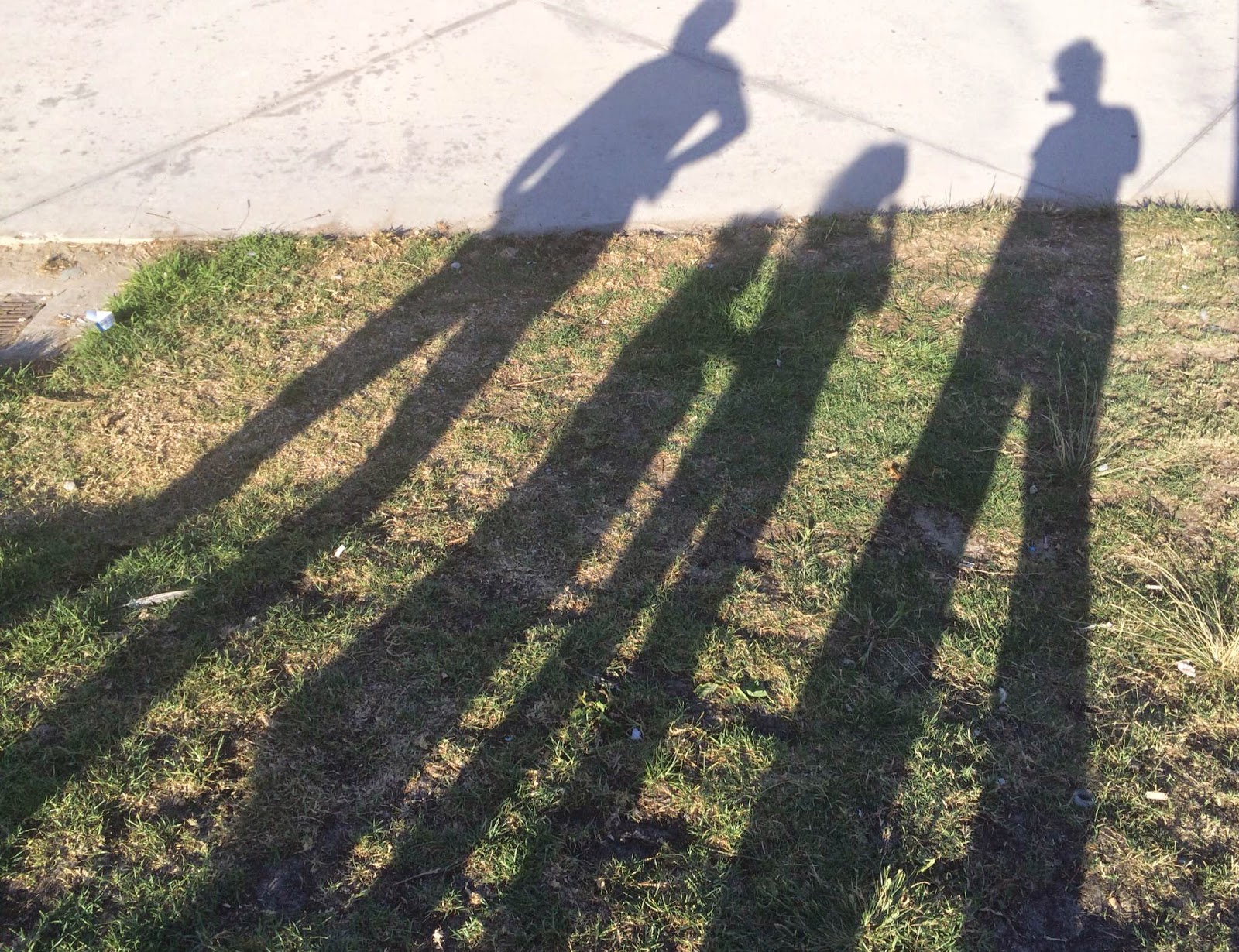 I wasn’t an anxious child.  Or if I was, I certainly don’t remember feeling that way.  I remember having a lot of friends, getting good grades and wanting for (almost) nothing.

I don’t remember having difficulty sleeping or eating.  Like many teenagers, I had some body image issues, but they were not debilitating.  I was happy and carefree, as young children should be.

It wasn’t until right after college that I began to struggle with anxiety.  I was living on my own for the very first time and was very particular about the condition of my apartment.  I kept an insanely regimented workout schedule (like, 5am in the snow, regimented) that was way more about my commitment than my weight loss.  And, admittedly, I was very critical of the decisions made by family and friends with which I didn’t agree.

I will never forget the moment when it all hit me.  I’d had some girl friends over for a viewing party (who knows what show we were watching, but seeing as this was in the late 90’s, we were definitely ahead of the time).  Several pizzas and bottles of cheap wine later, while cleaning up, I noticed a large pool of grease that’d seeped through a cardboard box and onto my table.  That was it.  That was the moment.

Though never in my life having (intentionally) purged, I ran to the bathroom quite sick.  I recollect little else from the night other than feeling the need for a shower, a good cry and a sleep aid.

For some people, sadly, that night may not seem so out of the ordinary.  But for anyone who knew me in high school or college, this is hardly how I believe to be remembered.  More importantly, who gives a shit how anyone else remembered me (or didn’t).  The above may seem miniscule to you, but it was gargantuan to me.  I knew something was wrong.

Thankfully, I had a strong support system around me.  The moment I waved a little white flag, I was encouraged to seek professional help to better understand what was happening.  And I did.

Over the years, I have learned to manage or at least cope with my anxiety.  There are days, of course, that are far more difficult for me than others.  Like with anything, there is an ebb and flow.  For me, it is a part of life.

It should not, however, be a part of life for my daughter.  Goddamnit.

One of the greatest gifts of being a parent is passing the best of one generation, and those before it, on to the next.  Names, traditions and recipes are just a few of the many beautiful things we pass on to our children.  No one wants to think about the other stuff… I know what those things are for my family just as you do for yours, try as we may to hide them.

Then just last night, I saw my daughter holding that very same pizza box.  The situation was entirely different, of course.  But in her eyes I saw myself, looking at the grease stain.

It is hard to describe exactly how I felt in that moment, but it was one of my most vulnerable as a parent thus far.  My heart broke, as guilt set in for the weakness I've potentially passed from my heart and mind onto hers.

But a split second later, I realized that in that weakness, there is a great ability to grow… and grow.

Oh how I look forward to doing that, together.