Am I Going To Hell For My Position On Godparenting?

What is a Godparent, really?

The job description varies.  I’ve heard main responsibilities ranging anywhere from being a strong presence through which a child is brought closer to God to being the adult who would step in as a parental guardian should both biological (or custodial) parents die.  Even in today’s job climate, I can’t imagine people lining up for that position.

I haven’t spoken to my Godparents since I was 18.  While I do remember them as a small part of my childhood, they signified little more to me than a bonus Christmas and birthday gift combo in December.  This isn’t because I was spoiled or unappreciative, but because I rarely heard from them otherwise.

My first memory of my Godparents was during a well-intentioned sleepover at their home when I called my mother hysterically crying, begging her to come pick me up.  The last was when I was 18 and my father was dying in a hospice.  They lived nearby, and happened to stop by for an obligatory visit moments after my father had passed, unaware of their poor timing.  Next thing I knew, my Godmother had graciously offered to drive me home and my mother (albeit hesitantly) accepted on my behalf.  She spent the 40 minute drive trying to make up for 18 years of disconnect while I wondered how the hell she could chain smoke on the highway in a small car with a teen who’d lost her father to cancer literally moments before.

Today, nearly 20 years later, my lungs still tighten at the mere recollection of that ride.  As for my Godmother, I doubt she had any idea how I was feeling.  Whether my immaturity for not speaking up or her unkept promise to stay in better touch is to blame, I am unsure.  I don’t think we ever spoke again.

The Godparent issue didn’t arise again until I had my own children.  My husband and I were both raised as Catholics.  My grandfather attended church daily for much of his adult life.  My aunt is a nun and my father studied briefly at a seminary (where he took issue with not being permitted to have his Swimsuit Issue of Sports Illustrated).  My husband attended parochial schools and we met at a Jesuit college.  We always intended to baptize our kids.   That said, they are currently 3 and 5 years old and have yet to receive the sacrament.  Why?  Because he and I can debate the significance of a Godparent for days, or even decades.

The seemingly most common choice is to have one of the parent’s siblings do the honor.  My parents did that for both my brother and sister, and it worked out just fine.  (An only child, my mother chose her first cousin and his wife as my Godparents.)  But isn’t being an aunt or uncle enough?  I am a Godmother to one of my nieces, and I do not love her any more than I love the other (or my nephew).  She doesn’t get better gifts, and as she grows, she won’t get better advice.  I am an equal opportunity aunt.

The second school of thought is to bring someone new into the child’s life that wouldn’t otherwise have as great a role.  I’ve heard of asking a good friend or mentor, which sounds like a wonderful alternative, until you think about all the BFF’s you haven’t seen since your wedding day.

Most of us were baptized when our age was still measured in weeks.  Whether our parents thought much about the ritual or not, it was an assumed part of the process.  Is it still?

Clearly times have changed.  I have friends that waited until they were done having children before christening them all together.  Another chose two Godmothers, and no Godfather.  I know people who have asked the child’s grandparent to be a Godparent, which I find to be one of the stranger alternatives, but I’m hardly in a position to judge.

Believe me, my indecision isn’t a cop-out.  Add to my list of unsolicited parenting advice the time I was told that should a non-baptized child pass away, it will not be permitted into heaven.  Do I believe that nonsense?  No, but it’s not necessarily a risk I’m comfortable taking.  And I certainly don’t want any of us going to hell because of it.

I haven’t stopped thinking about this story since I heard it in church yesterday.  Granted it reads like a chain email, without the eerie “forward to 15 people within 15 minutes or die”.  But why take the risk?

“A woman stopped to buy a magazine and some cookies before rushing to the airport gate for her departing flight, only to find it had been delayed a few moments.  She sat in an empty chair, put her stuff beside her and began to flip through her magazine while enjoying her first cookie.  To her surprise, a man on the other side of her things reached his hand into the bag as well.  Completely appalled, she glared at him.  Stone faced, he maintained the stare as she went for cookie number two.  So did he, and the showdown continued.  Now infuriated, her hand plunged into the bag once more.  She stared at him, much like a lion protecting it’s kill, until he reached into the bag and removed the very last cookie.  Just then, as they called for boarding, he broke the cookie in half and shared it with her.  Frazzled, the woman headed down the jetway, took her seat and settled in, no doubt hoping the unoccupied chair beside her would not become that of the cookie bandit.  Thankfully, it wasn’t.  Now ready for a relaxing journey, she reached into her purse to grab the magazine once more, but pulled out her bag of cookies, still full.”

In it’s simplest terms, this story is a good reminder that things aren’t always what they seem.  (He didn’t eat her cookies, people; she ate his.)  Take it a step further and you’ll see that sometimes we are the ones taking from the people we believe are taking from us.  But my favorite lesson to take from the story is this… Always share your cookies. 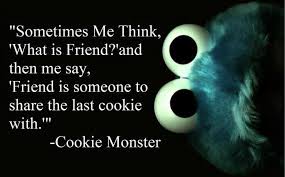 Even Ryan Gosling admits to needing a break from himself every now and again, and that's exactly what I've needed over the last couple of weeks.  As my sister got married and my family came into town, I found it more enjoyable to worry about my toddler beach followers than my online ones.  Heck, it's very possible you enjoyed the break from me as well.  My husband can totally relate.

That said, I am back.  But before sharing something new, I wanted to celebrate an old favorite.  I was lucky enough to have Zooey Deschanel's website "Hello Giggles" share an essay of mine on Father's Day 2012.  If you missed it, here it is again.  And if you loved it, remind yourself why.  Here's a preview...

I knew long before considering marriage the likelihood I would call my in-laws Mom & Dad was incredibly slim.  I assume for some it’s either an uber close relationship or level of great comfort that enables them to bestow the same moniker on another person as they do the one they peed, pooped and puked on for any number of years (dependent upon how much fun they had in college).  For others, it’s just tradition or even obligation.  For me, none of that had a thing to do with it... (click here to continue reading)