It freaks me out to think how different the world will be for my children than it was for me.  For better or worse, here are some expressions that were so commonly heard in my childhood that will never be heard in theirs.

Mom, where are my Freezy Freakies? 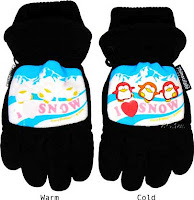 Oh Shit, it’s Friday! I need to get to the bank before it closes or we won’t have any money for the weekend!

Who do you think shot J.R.?

Do you have total phone?

George Michael is SO sexy! (spoken by a woman)

I cannot wait for Michael Jackson’s ‘Bad’ Tour.
Can I borrow your Word Processor?

That bathroom is so gross it could give you AIDS.

I totally want Ross to hook up with Rachel. 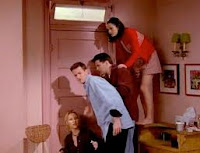 Those Benetton ads are so offensive!

If you are as old as I am, you know the list goes on and on... as does the time.  It is important for us to live in and embrace the present, but to cherish the past makes the journey into the future all the more worthwhile.  I look back because it enables me to look ahead.

Many years ago, my sister-in-law talked me into using a placenta-based hair treatment.  I gagged as I put it on my head, envisioning tiny babies nursing my locks back to their full potential.  Crazy hallucinations aside, I knew even then that looking good takes work.  I had also grown up with the Pantene ad campaign “Don’t hate me because I’m Beautiful”, and of course everyone wanted that gig.  So, I sucked it up. 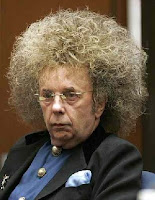 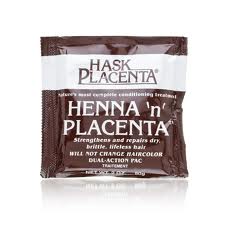 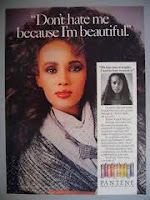 In all honesty, I haven’t thought about placenta much since.  Then I learned that “Mad Men” star and total bombshell January Jones eats her own placenta.  Like, with her morning java.

In all seriousness, I am being a bit overdramatic.  Though not commonplace, (and not yet FDA approved) more and more women are having their placenta dried and encapsulated, like a vitamin.  It is believed that the placenta may promote a speedy recovery from pregnancy and help prevent post-partum depression, but this is considered scientifically unproven.

Fancy-schmancy lingo aside, it does sound like a reasonable argument.  And as long as it is taken in a capsule and enjoyed Hannibal Lecter style, I could probably stomach it.

I bet my hair would look ah-mazing.
Posted by Karri-Leigh P. Mastrangelo at 3:18 PM

Bad Edit? I'm Not Buying It.

10am is undoubtedly the best time to stand at the office water cooler.  It’s the moment when co-workers who adamantly deny enjoying reality television all happen to crave jugged water at the very same time.  Guaranteed, talk will be about last night’s eviction, elimination, cat fight or (if you're lucky) bitch slap.  Then, just at the moment everyone is most riled up, secretary Betty reminds the gang, “well, everything happens for a reason”.  The group shrugs and returns to their desks, tepid water in hand.
My greatest pet peeve is overuse of the expression "everything happens for a reason".  Couple it with an insincere or passive-aggressive smile, let alone a rehearsed reference to the G-o-d, and I’ll freak.
Years ago, I believed this sentence was used most frequently in funeral homes or outdated self-help books, but that's no longer the case.  The sets of reality television shows have taken a ridiculously firm lead.  You can change the venue all you’d like, but I’m still not buying it.
Did this just “happen for a reason”?
Or this??
Or even this???

The short answer is: Yes, of course it did.  But there's way more to it than this gross over-generalization.
Many starlets (and their supporters) are quick to blame a “bad edit” or producer tricks for their portrayal on television. In the many years that I have produced TV, I have never used eye drops to make someone cry (although, I did once see a cast member use an onion at a very opportune time).  I have never pinched someone to make their face appear flushed, or given them shellfish to make their skin break out with blotches. For whatever the reason- sadness, nerves, fear, embarrassment, exhaustion, butterflies, or even fame- they broke on their own.  Then, in an effort to excuse, ignore or justify the honest reaction, they sugar coated it and tied it up with a bow that reads “everything happens for a reason”.
I challenge you never to use this sentiment ever again.  But if you do, please elaborate.  Own who you are, as no one else ever should.
Posted by Karri-Leigh P. Mastrangelo at 2:24 PM

Literally any moment now, Jessica Simpson is putting her famous Mom Jeans to good use and becoming a mother.  So begins the great debate: Mom Jeans versus Mom Genes.  Who will prevail?  If this quote from Jessica's recent Vanity Fair interview is any indication, I am a tad concerned:

“I swear, I will croak if she asks me for a pair of Nikes instead of Christian Louboutins!”
Now, I get that the baby’s father is a professional athlete and Jessica is a professional whatchamacallit, but I am still disturbed.  Doesn't she want to raise a well-rounded daughter who can kick it in Nikes and rock it in her (by then vintage) Louboutins?  Plus, it is essential to review an entire collection before judging based on one sole pair (pun intended).

So, although the comment has always struck me as completely repulsive, I am going to put my money where my mouth is.  I’m just hoping that the critic is kind.  Luckily, she is not only a successful celebrity stylist, but also my sister.
As of this morning, I have 71 pairs of shoes- some have travelled with me since the Reagan Administration, others have barely touched pavement.  From that collection, I’m pulling a few for Jeni’s review.  And like any loving sister would do, I may debate, or smack her.
JENI: These shoes say loud and clear: "I am Fu*king Fabulous. Don't mess with me; Don't mess with my sister Jeni and don't mess with my swag. Period."  Every girl I know should have a pair.  I don't, but I plan on stealing the above this weekend, fo sho!
KL: (sigh of relief).
NEXT:
JENI: "Hello my name is Karri. I owned and rode horses.  I wasn't that great at it, but I keep these riding boots in my wardrobe to remind me of how good my sister was...."
KL: You were a Canadian National Champion... not an Olympic Gold Medalist.  And I don't care what you say.  They look great with my jeggings.
NEXT:
JENI: The fact that these shoes are worn in the spring makes me think mom never taught you seasonal colors.  But at least the world knows you love Santa...and you always will...even in the Spring. #teamsanta
KL: For the millionth time, they are leopard print!  Whatever.  Snooki would love them.
NEXT:
JENI: I've totally seen these before.  On Dad's secretary.  Over 20 years ago.
KL: You've always been jealous of me, Jeni.  Clearly the only thing in this photo over 20 years old is my pedicure.
NEXT:
JENI: Karri-Leigh FOR SURE lives in LA because no one in Jackson Hole wears these.  But every good LA girl has a fabulous pair of Bear Paws for Spring... to wear with her mini skirt.
KL: Don't hate.  They were a gift.... FROM YOU!
NEXT:
JENI: Every legit working mother has a pair of kick it sneakers- for chasing the kids, working out (never) and running from the play date to grocery store.  Hence, the fact that I don't own a pair. But trust me.  If Jessica Simpson doesn't have a pair of these, she will soon.
KL: And I'm sure she will buy 3 pairs- one for the Nanny, one for the baby nurse & one for (the baby's) personal assistant.
NEXT:
JENI: I would not be able to say you were my "for real" (not for fake) blood sister if you did not own at least one pair of (real) Louboutins... and the fact that you own a pair that are both a heel and a boot in one show me how truly resourceful you are!
KL: I may be older, but you've taught me well.
Bottom line: I've got 142 shoes and more flip flops than my kids can count, but there are only 3 pairs of ladies shoes in this house that truly matter... 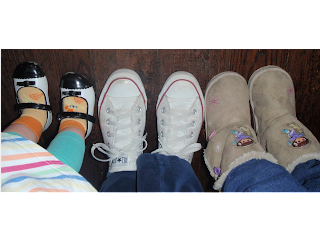 Unless Jeni is here.  Then there are four.  (Can you tell who's are who's?)
Posted by Karri-Leigh P. Mastrangelo at 12:26 AM

(Sometimes) I Am Not Perfect

Several weeks ago I shared some concerns and assumptions regarding the uber-important process of Valentine distribution in Pre-Schools.  For example:
Don’t be too quick to assume the kid who doesn’t hand out cards has an absentee parent, or is a Jehovah’s Witness.  More than likely, the “oversight” is an intentional way of putting a vibe out that the child is “too cool”
Though not quite ready to admit that I was wrong in stating the above, (as clearly I wasn’t), based on true events, I am ready to amend this hypothesis.
As Emilia and I were making homemade cards for her classmates, she kept repeating, “I want to make Sebastian’s card”.  I was suspicious, but not alarmed.  Eventually, I made the grave mistake of asking for a bit more info.  “He’s my boyfriend”, she responded.  In that very moment, as my life flashed before me, I vowed to buy a defibrillator for my home. 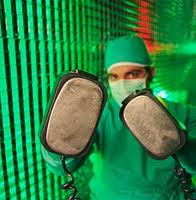 A few days later, as I picked her up from school, Emilia made the rounds of goodbyes to her classmates, calling each by name.  It was the first time I saw Sebastian, who struck me as the preschool equivalent of People Magazine's “Sexiest Man Alive”.  Again, I bit my tongue, deciding to wait and see how things played out before rushing her to a convent.
Well, the big day came and went, and Emilia did not receive even a Dora sticker from Sebastian.  I’m not sure whether to credit the sugar high or the short attention span of a toddler, but Emila didn’t seem to notice.  So, I stuck with my original assumption that the George-Clooney-in-training was “too cool for school”.  Thankfully, I was wrong.
The next day, Emilia arrived home from school with a special twinkle in her eye, and an envelope in her hand.  Sebastian had been sick on Valentines Day, but made up for the absence upon his return.
After I read the card, she grabbed it from my hand and gave it a sweet but simple kiss… then quickly stopped herself, shouting excitedly “I don’t want to get it wet!”
Thankfully, I was able to steal a second look to size things up (i.e. over-analyze the crap out of it).  Here's what I learned:
Sebastian didn’t sign the card himself, which was a bit of a disappointment, but let’s face it… Anyone who’s anyone in LA has an assistant.  More important, was how he wrote her name on his own, and spelled it correctly (quite a feat for any name in my household).  But of the greatest importance was the enormous smile he put on her face…
So, was I wrong?  Not really.  There are certainly times when my original thoughts still apply.  But I do need to make one significant addition.  Next Valentines Day, if your child doesn't receive a goodie from their crush, just remember... He could be holding out, saving his card for the very next moment when it will stand out a tad more- and make an even greater impression.
Posted by Karri-Leigh P. Mastrangelo at 11:17 AM