I attribute so many of the incredible things I've done in my life to my career.  I have been in a follow vehicle covering the leaders of the Boston Marathon so closely I could feel their sweat.  I’ve documented then faceless women heading into labor, and left the delivery room hours later holding mother and child dear to my heart.  I’ve worn Olympic Gold Medals and precious jewels worth more money than I’ll earn in my lifetime.  Hell, I’ve even met Jessica Simpson. 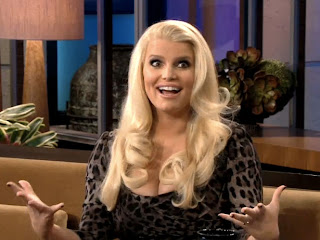 Still, some of my most valuable experiences are those way less tangible.

Several years ago I worked on a show that had me traveling in and out of a small American city to cover a group of teenagers periodically throughout their school year.  My camera operator and I followed them to school, athletic practices, birthday parties, spray tans and pedicures.  Having spent countless hours in their homes and lives, we build relationships with these kids much stronger than expected.  I felt like their big sister.

So after having heard one young woman refer to something as “so gay” for the hundredth time in interview, I chimed in.  Immediately, I learned why the parents of teenagers struggle to relate to their kids during some of the most difficult but important conversations.

“Have you ever met a gay person?” I asked.  She said no, which I found shocking, seeing as I could have easily pointed out half a dozen homosexual students in the halls of the high school she roamed daily.

More powerful for me, though, was the fact that our cameraman- the one rolling on this current conversation in addition to dozens of others- was gay.  I wondered how he felt in that moment, so much so that I wanted him to slip into the hot seat.

Don’t get me wrong.  I do not believe that every homosexual man or woman wears a brand on their forehead labeling them as such, nor should they.  Our freedom to love (and marry) whom we choose should be an individual, private, sacred and universally respected decision.  But what I learned in that moment is too often it's ignorance that interferes with our decisions and behavior when it comes to premature or unfair judgment.  Therefore, it becomes our responsibility to educate.  If we don't, who will?

We live in one of the most technologically advanced societies on the globe.  But when it comes down to it, our earth is made up of water, rock and soil.  (Suddenly the expression "dumb as rocks" has more meaning than ever...)

Simply put, if you want the world to change, you’ve got to teach it to. 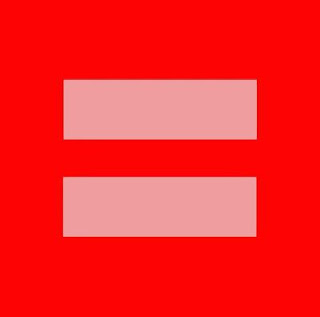 My brother farted on my face when I was little.  I passed on a college spring break at the beach with the girls in exchange for a trip to Ireland with the boys.  I spent the summer of 2009 with some of the most vulgar men in Bachelorette history living in what they (lovingly) called a “barn” while Jillian Harris lived in a mansion- and left with not even a scratch.  Plus, I've had two children.

Let’s face it.  I don’t get grossed out easily.  Still, I am dumbfounded by so many of the nasty things that men do that women just don’t.

1. Why do men like to use the bathroom mirror as a gallery for toothpaste spin art?  Don't get me wrong.  I'm all for creative expression, but I also know how to use a bottle of Windex.

2. Jon Hamm loves to walk around his "office" (and apparently the city) going commando.  On the rare occasion that I visit a gym, I see many a muscular dude walking around shirtless, but never a woman.  Why is it ok for a dude to flaunt his man parts, but not OK for a woman (hopefully way more fit than I) to show hers? 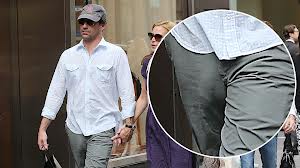 3. And speaking of pants, we all put ours on the same way, but we certainly don’t remove ‘em the same.  Why do men think it is OK to drop their pants, boxers embedded, carefully step out of them like they are a sleeping baby, and then leave them on the floor?

4. Women get facials, use exfoliants and spend mucho dinero on miracle creams from the Dead Sea for their skin.  Sounds complicated, but really the solution is simple.  DUDE NEEDS A BIORE.

5. And I guarantee that any man reading this, whether at Starbucks or headed into the bathroom with his ipad in one hand, has his (other) hand down his pants.

My only hope is, if it is the latter, he will discover one of these while in there: 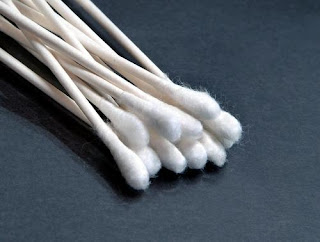 I Know Where Abby Lee Miller Will Be On April 11th... And Now You Do, Too

To most of the film and television industry, reality TV is just “alternative programming”.  But to millions of Americans (and people around the world), it's a passion, obsession, guilty pleasure and form of entertainment they cannot live with out.  That’s likely the reason why in 2012 alone there were well over 300 unique reality series aired.  It's also why I love what I do, and support the genre in any way that I can.  So when the producers of the very first Reality Wanted Awards asked me to help get the word out about their project, I couldn’t resist.  Here is all the info, straight from their team.

"Award shows are something we look forward to each year.  Billboards are plastered with well wishes for the nominees, then congratulatory messages for the lucky few.  Through eternity, winners of the coveted Oscar are known no longer by their given (or stage) name, but as “Academy Award Winner” such and such.  Their peers respect them, their following on Twitter goes through the roof and they will forever go down in movie-making history.  But with so many modern day families, there is an ugly stepchild.  Enter reality television.

The arts are something that deserve celebration and putting together a reality show is truly an art form.  From casting to challenge production, videography to editing, and music composition to graphic design, there is so much more that goes into the making of a “reality show” than following around a group of people and placing the content on television.  Now we are going to set the record straight.

Created by Kristen Moss and Andrew Ward, and produced by an amazing team of reality TV, PR and talent professionals, the first annual Reality Wanted Awards will take place in West Hollywood on April 11th, 2013.

But they can’t happen without your help.  Who better than the fans to vote for the winners in 22 incredible categories such as “Bad Ass Crew”, “Most Shocking Moment”, “Biggest Sore Loser” & “Greatest Villain”?

The final nominees were announced on March 1st and public voting started right away.  Since then, thousands of votes have poured in daily.  Help make your mark on reality television history by voting here.

As for those who've already made their mark, we’ll have plenty of them.  Here’s just a sampling of stars attending:

The awards are sure to be a who’s who of reality TV, so don’t miss out.  We’ll have interactive live-streaming video feed from the red carpet.  Follow us on Twitter at @RealityAwardsTV to get up to the moment updates and tell us what you think.  Visit our site to get your ballot or tickets to the event.  Be a part of this monumental time in reality television.  Vote.  Tweet.  Have strong opinions… What would reality TV be without them anyway?"

May the best bitch win.

It's Too Late To Listen To Amy Winehouse, But Listen To Momma... Go To Rehab, Justin Bieber.

As I've mentioned (hundreds of times) before, I have met Justin Bieber.  I was so in awe of him, his talent and his energy.  But what struck me most was how freaking young he is.  Put the albums, the twitter followers and the stamps in the passport aside, and he is still in his teens.  He has over a year before he can even drink legally in a bar.

There is no doubt that the last several months have taken a toll on the Biebs, his image and his "innocence".  Now being faced with the pressures of entering rehab, he is lashing out at those who have walked in the very same shoes. 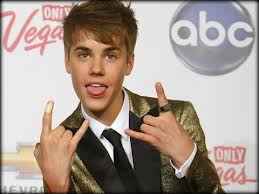 Maybe he won't listen to his fans.  Clearly he has no plan to listen to Lindsay Lohan, and it is way too late to listen to Amy Winehouse.  But maybe he will listen to me...

And before he gets the chance to ask, as every child does, "why?", let me tell you.


In the spirit of Throwback Thursday, and other celebrity drug debacle, here's look back at my rant (and obsession) with 911 calls including Demi Moore's, and my own!

I’ll never forget the night I dialed 911.  A fire raged in my neighbor’s garage and I stood at our fence holding a garden hose with the force of a sloppy drool.  After (seemingly) hours of waiting for firemen, the operator said I’d been on the line a mere 4 minutes.  Seconds later, I heard sirens.  Moments later...

Click here to finish reading "911, What's Your Emergency (And P.S. I May Tell The World)"

With family, there are always strings attached.  So when my brother promised to visit for the holidays last year “on one condition”, I kept my hopes in check.

“I’m not coming unless we go to Caine’s Arcade”, he said.

Relief!  My girls love arcades.  Granted they can feed quarters into a germy skeeball faster than the Octomom can dole out Goldfish, but it's a great (read: energy burning) pass time.  Admittedly though, I had never heard of Caine’s Arcade, and wondered what it was that put this one above the rest.  To Google I went.

Caine Monroy is a young boy living in East LA.  The son of an auto mechanic, Caine was stuck with a summer vacation stationed in his Dad's garage.  So, while many children spent their break traveling from tennis camp to swim lessons in an air conditioned SUV, Caine built his own arcade.  Yes, he built his own arcade, using cardboard boxes, tape and whatever supplies he could find in the shop.  The result was nothing short of incredible.

Thankfully, there’s no shortage of filmmakers in Los Angeles, and at least one was in the right place at the right time.

The next 11 minutes will change your life.

From the moment my brother and his family boarded a plane for LA, I stalked the Facebook & Twitter accounts associated with Caine’s Arcade to find out when they would be open for play.  My nephew Nicky, a second grader in Connecticut, was so greatly inspired by Caine and his limitless creativity that I suspected introducing them would be a greater gift than any Disneyland Speedpass.  And, it was. 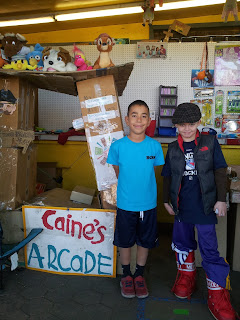 Visitors from around the world have come to be inspired by Caine and his imagination.  Donations have poured in from continent to continent, with the hope that Caine’s vision will gain the momentum and voice to reach every home on the planet.  Now, it has reached yours. 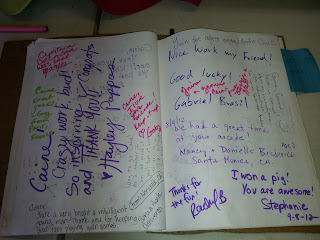